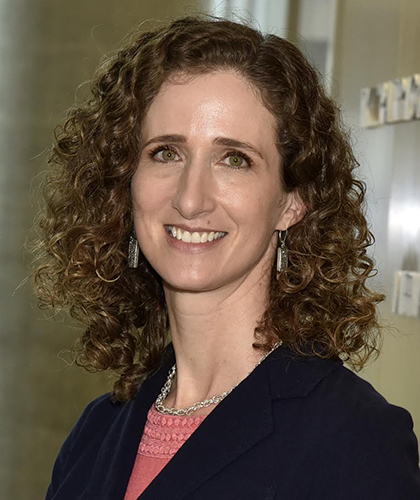 B.S., Mechanical Engineering, Stanford University
Dr. Clyne is director of the Vascular Kinetics Laboratory, which investigates integrated mechanical and biochemical interactions among cells and proteins of the cardiovascular system. She is particularly interested in how endothelial cell mechanotransduction changes in a diseased environment, and how fluid shear stress and substrate mechanics affect biochemical binding kinetics, transport, and signaling.
Dr. Clyne was inducted into the American Institute for Medical and Biological Engineering (AIMBE) College of Fellows in 2019. She received the NSF CAREER award in 2008, an AHA National Scientist Development Grant in 2010, and the BMES-CMBE Rising Star award in 2011. She has received research and educational funding from NSF, NIH, AHA, Department of Education, the Nanotechnology Institute, and the State of Pennsylvania, and she has published in diverse journals including Lab on a Chip, Journal of Biomechanics, Annals of Biomedical Engineering, Tissue Engineering, Biophysical Journal, PLOS One, The Journal of Biological Chemistry, and Circulation. She is a fellow of ASME and the AHA, and a member of ASEE, BMES, NAVBO, and SWE.

Dr. Clyne's Vascular Kinetics Laboratory conducts research at the interface of engineering, biochemistry, and vascular biology. In their prior work, the group largely focused on how an altered glucose environment (e.g., in diabetes) impaired endothelial cell response to shear stress and cyclic strain. Dr. Clyne and her lab have demonstrated that endothelial cells in high glucose do not respond appropriately to mechanical stimuli. Today, the group focuses primarily on the opposite question: how the mechanical environment affects endothelial cell glucose metabolism. They are integrating mechanobiology and metabolism, with the hope of using metabolic engineering to decrease the burden of cardiovascular disease and cancer. With new collaboration opportunities at the University of Maryland, Dr. Clyne and her lab group plan to extend their cell and animal work into human studies.

A new study used diffusion imaging to measure the microstructure and tissue composition in the hippocampus after 30 minutes of exercise.

To advance inclusive medical therapies and diversity in fundamental science, one Maryland engineer leads by example.